In my blog, I describe how you can influence one’s decisions using different approaches and techniques. The more fully we consider the situation, the higher the effectiveness of our actions.

Therefore, in this article, I’m going to describe all the factors that influence the decision we make, in the order presented by Robert Sapolsky, Professor at Stanford University.

1. The Brain. It’s the brain that affects a specific decision at a particular moment. The brain receives the information from the outside, processes it, and issues a solution. In most cases, the decision is made on an unconscious level, even in the cases when we are convinced that we make a decision consciously;

2. The Environment. For neuromarketing, the environment is an opportunity to influence the decision of a particular person. In this case, we can be influenced by numerous factors: the situation, the appearance of the person we interact with, etc.

If we experience some stress or fear of the environment, our amygdala can make us act rashly. Stereotypes provide our brain with certain patterns, according to which the decision will be made. Thus, for an American policeman, it might be a decision to fire at a well-built black guy reaching for his phone.

Considering that policemen in the United States are taught to give their own lives the top priority, anyone, any “big black dude”, as a policeman described his innocent victim, is in danger.

But your prefrontal cortex does not work very well when you are feeling pain or hunger, e.g. when you lack energy;

3. Hormones. Hormones have a significant impact on our decisions. They change our perception of the incoming information. For example, oxytocin can affect the increase of confidence within the group, and testosterone will push us to uphold our status within the society.

I’ve already described the ways of using hormones to influence the fans. The positive thing about it is that we can create conditions around people that will promote the release of certain hormones. A well-developed strategy can help achieve high efficiency due to the direct impact on the unconscious;

4. Neuroplasticity. The incoming information has a lifetime influence on the changes in the brain. However, the changes occur not only in the long term but also in a short period.

5. Adolescence. The transitional age between childhood and maturity is important for our brain.

An axon of a frequently used neuron gets covered with a myelin sheath. Myelin is formed in the human body in the very childhood when a kid is learning and activates again just in adolescence. At this age, the body is preparing for the transition to the adult life.

Along the evolutionary path, people entered into marriage at this age. For women, this meant the possibility of leaving for another group. It is believed that for men the likelihood of such was much less, as evidenced by the observation of primates. Leaving for another group meant comprehending the new rules of society, another culture, and even language. So we are talking here about the processes similar to that at an early age.

It is the life periods during which there is an active formation of myelin in our body that are crucial for us. During this period, we acquire the strongest and the most ramified neural connections.

6. Childhood. This is a critical period of life for the formation of the brain. In the previous item, I described the importance of myelin formation.

However, in childhood, there also occur epigenetic changes which activate some genes or “turn off” the others. Stress can affect the size of the amygdala even during the formation of the fetus in the womb, which eventually leads to a less effective containment of aggression;

7. Genes. Interaction of the environment and the genes can cause “triggering” of a propensity for a certain behavior. Subsequently, this can lead, say, to an antisocial behavior.

We can observe a similar thing in the case of a gene called MAOA. As shown by Robert A. Philibert and his colleagues’ study, child abuse becomes a trigger for activating the MAOA gene which leads to the antisocial personality disorder, that is, to sociopathy;

8. The Ancestors. Various factors of influence on our ancestors are brought to us not only by our genes but also by the culture and society that surround us.

Modern Western society enjoys the values ​​whose origins date back to Ancient Greece and which managed to spread widely thanks to the Roman Empire;

9. Evolution. People did not originate out of nowhere, apart from other animals. One can trace a set of patterns characteristic of other primates in our behavior and the structure of our society.

We have common ancestors, so it is logical that many of the features of our species coincide with the characteristics of not only our closest relatives (such as chimpanzees and gorillas) but also much more distant species.

Nevertheless, different species are characterized by the different environment in the process of evolution, which leaves an imprint on our behavior and our decisions.

Evolutionary we are very social animals. We are prone to conformism. Too much depends on the society we are in and the values ​​adopted within, to neglect the quality of our environment.

But even the social parameter is not peculiar to all primates. For our species, sociality has become decisive for our evolutionary success. Sociality keeps playing one of the defining roles in our lives and our decisions.

As we can see, there are a lot of factors that have a significant influence on our decisions. In the context of neuromarketing, I’ve adopted to distinguish three levels of message formation: society, evolution/genes, and the basis. 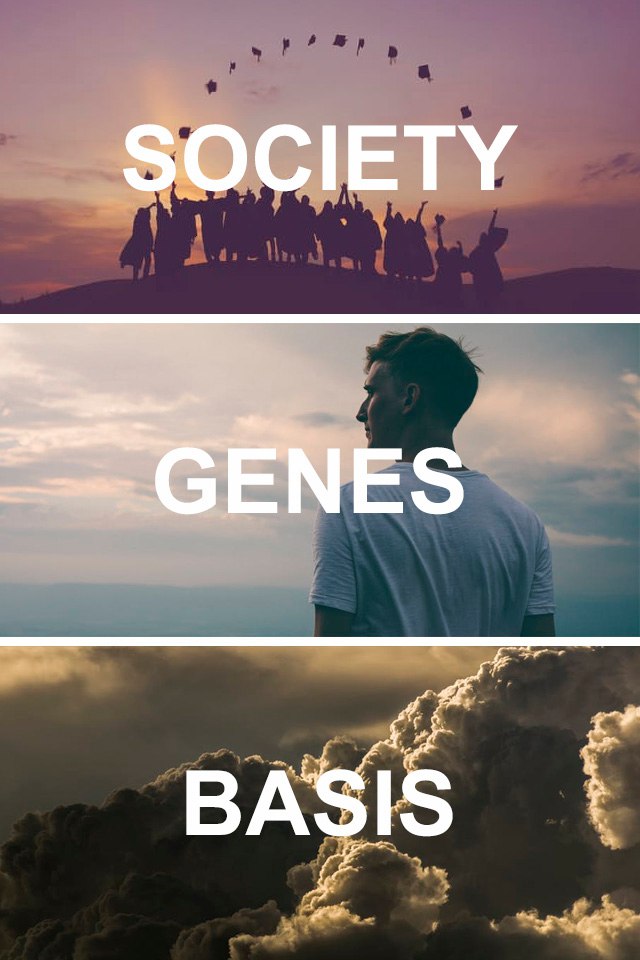 This division allows me to quickly and logically create an appeal to the audience. I’ve described this strategy in detail in my article “Simple logic of manipulation”.

Do you want to get a consultation, a development of a strategy and help with its implementation? Write to me at Email leon@sportsneuromarketing.com, and we will respond within 24 hours.

SEE ALSO: Why a large choice is bad and how to learn to make decisions