On the one hand, you want to provide your consumers with the largest choice, but on the other hand you understand that you do yourself a disservice with too much choice, don’t you? The situation is familiar for so many. We want to have a choice, but we do not like to choose. Today we will understand the reason for this feature and learn how to make effective decisions.

Do you remember the moment when you realized you wanted to have the cellphone others have? You were no longer interested in other cellphones. You needed an iPhone. You might have faced a similar desire about an iPod. Though, you most likely wanted absolutely every product in the Apple lineup.

It was a really big strategy on the Apple’s part. Marketing created a brand relationship with the notion of creativity. Competent positioning in conjunction with an unprecedented perfectionism and understanding of the work of neurodesign left no chance for rivals.

We are not going to talk about the way the company changed after the death of Steve Jobs. It’s too big a topic for discussion, which is sure to lead to a discussing of the negative impact of Wall Street – it’s probably the only topic in economics on which both the representatives of the Chicago School of Economics and their opponents agree.

At that time, Steve Jobs limited the choice of the consumer as much as possible, nevertheless giving a certain illusion of choice, based on the color and amount of memory. That is, the consumer had, in fact, a certain choice. But it was an extremely clearly limited one.

It was done to avoid the so-called choice paralysis. The reason why it happens and the way to act correctly will be discussed later. First we are going to consider another real world example.

There is a well-known experiment with the jam sale (the jam experiment). It was with it that a new wave of popularity of the behavioral economics began in 2000, when Sheena Iyengar and Mark Lepper published a study regarding the effect of the quantity of jam being sold on the choice of consumers.

In one day visitors to the Californian grocery store saw a stand with 24 different jams. Visitors who tried the sample received a coupon for buying jam with a discount of $1.

The next day, the same experiment was conducted with the only difference being that there were only six jams. More jams attracted more attention – on the first day 60% of visitors stopped, and 40% did on the second. But on the day the choice was smaller, jam was bought 10 times more. 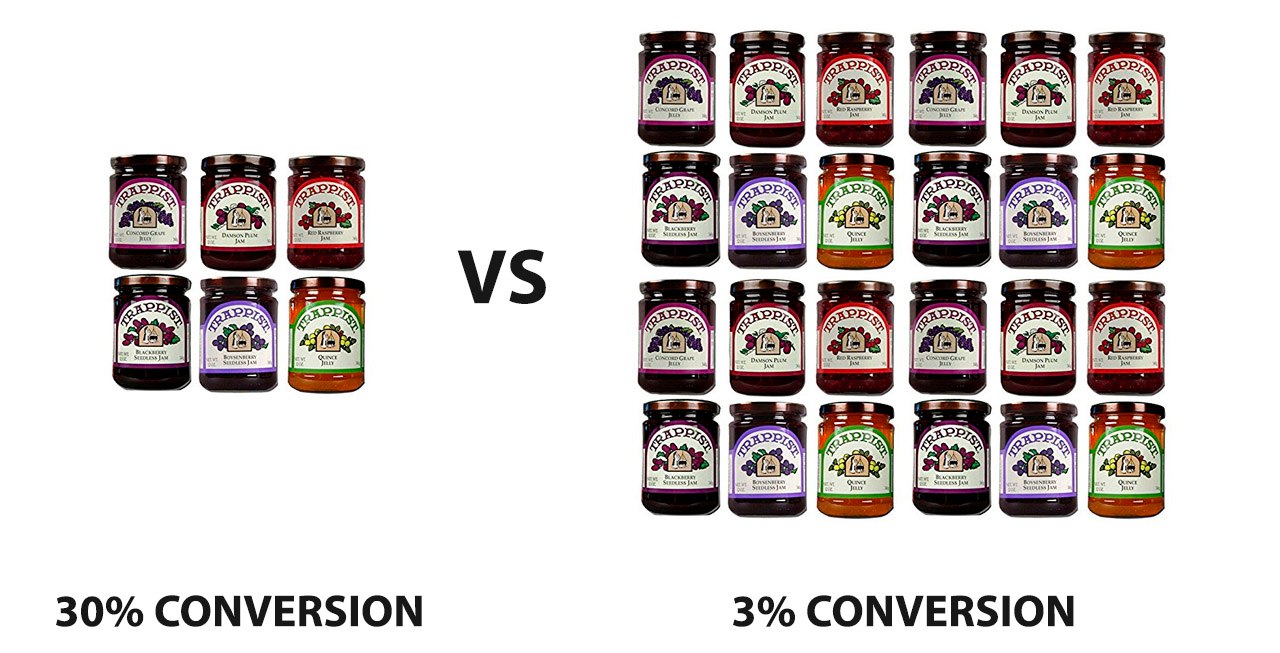 At the same time, psychologist Barry Schwartz reminds on the pages of the Harvard Business Review that a large number of choices is not just a smaller number of purchases, it is a lot of negative emotions created by the necessity to choose. That means you consolidate negative emotions to your brand.

Knowingly even such monsters as Walmart refuse too much choice of goods. With each new option of choice, we feel worse than before. Just think about this simple logic Barry Schwartz talks about.

What is the reason for us having such great difficulties in the decision-making process? Sure, it’s the unwillingness of our brain to waste extra energy. The brain spends a lot of energy, which has never been so much in the way of our evolution as it is now. Therefore, the brain evolved in such a way as to save energy by any means.

What is to be advised for those who choose? If you have been reading my blog for a long time, you are familiar with the somatic marker hypothesis. This hypothesis has given us a better understanding of the decision-making process. During our life course our brain creates somatic (emotional) markers for everything we encounter in life.

This is done to further save energy and make quick decisions. When we try to make a decision without emotions, relying on logic, we are faced with the actual impossibility of making a decision. We simply begin to enumerate potentially endless factors that may never run out.

It was made clear by the experiments of the somatic marker hypothesis author Antonio Damasio with people who had physiological brain disorders: in amygdala, orbitofrontal cortex and medial prefrontal cortex. They were the ones who could not engage emotions in the decision-making process.

Therefore, the advice is simple: get rid of unsuitable options as much as possible with the help of logic. Among the remaining, trust your own somatic markers. Even if you do not understand why, but you feel a certain inclination to a particular option, make this choice.

Your brain is most likely to be definitively determined with the choice anyway, so you will just spend time to find logical arguments for the right choice like that.

What is to be advised for those who create the choice? Do not complicate things. Using A/B tests, determine the optimal number of products to choose from. Provide the consumer with a little illusion of choice, but “help” him/her make a choice.

One way is the architecture of choice. I’ve already written about the incredible effect of opt-in/opt-out marketing.

In the article on how to choose the right price, I gave a clear example from MLS on choosing a subscription to MLS Live.

They give you an obvious choice (even emphasize it): an annual subscription for full access to content for $79.99. Do not want to pay for a year ahead now? Then there is not so profitable an option for you of $14.99 for one month. The $69.99 option looks completely unattractive, serving as an “anchor” for the $79.99 price to look attractive.

How do things work in sports? Certainly, the basic initial application of the information obtained in this article is in sales at the stadium. Do not give people too much choice. It will increase your sales and in addition reduce the cost of products that have not been sold and have expired.

The same applies to the sale of club jerseys and other souvenirs. People do not need a lot of choice. Provide your fans with a choice of basic options, use the combined options, combine it with an interesting sponsorship activation. But everything should be clear and understandable. Do not forget about the way to set the price correctly.

We often hear from coaches that it is a pleasant choice to choose among a large number of players. But everyone who played in Football Manager knows it is not that pleasant.

However, in reality, things are even worse: the coach has to leave in reserve or outside the application for a game of a living person, and not part of the database. This living person has his own emotions and goals. When it comes to the male team, you are faced with numerous problems that stem from the high level of testosterone.

What should one do in this case? It’s clearly a much more complex example than the choice of jam. In this case, the coach faces the need to take into account both short-term and long-term goals. And the coach is also a living person who will sympathize with the players whom he can not put in the primary team. Why? Don’t forget about mirror neurons.

In this case, you can not do without specialists who can establish motivation in the team. I’ve addressed this topic in detail in the article 5 Key Mistakes of Football Clubs.

Do not inflate the squad to give the coach the opportunity to conduct a constant rotation of the main team players whenever possible. It’s we who will help to adjust the motivation in the team.

Contact us by E-mail leon@sportsneuromarketing.com. We will respond to you within 24 hours.

SEE ALSO: Why the brain provokes us to fight for status