The ludic loop. The essence of this term is pretty familiar to you. The ludic loop is a phenomenon that makes you do something over and over again.

Perhaps the most harmless way of using this mechanism is in time-killing games on your smartphones. This is the essence of these games. You’ve got a close goal before your eyes, which makes you continue playing.

In fact, it’s a monkey inside of you reaching out for a banana, which is hanging so closely. A dopamine loop, just describing our whole life as a race for dopamine.

The best-known example of using a ludic loop in games is Tetris.

Another similar example is social networks, e-mail and applications like Tinder. The main point here is updates. One wants to see what new potential partners have appeared in the application or on the acquaintances list in the social network, what interesting news has appeared, what your friends, whom you are secretly jealous of, are posting. Or, maybe you are waiting for an important letter or checking up an interesting e-mail newsletter? Like ours, for instance.

But there are far more dangerous applications of the ludic loop. Professor of New York University Natasha Dow Schüll has introduced the term “ludic loop” after the years of studying a gambling addiction.

Do you think this is the end of it? As it became known from the New York Times investigation, Uber uses ludic loops to manipulate its drivers. OK, let’s call it motivation.

At any time, a driver’s application starts showing different statistics stimulating a driver to achieve certain new goals in this statistic.

But worst of all is an offer to reach a certain sum at the time of the application’s shutdown. 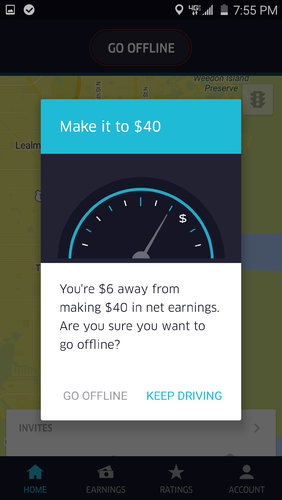 Let me explain from the position of a neuromarketer, why it is extremely unethical. It’s so unethical that one can discern in this bottom the yellow letter M, peeping out of the sand.

Uber uses a tired driver whose brain is consciously saving energy. It is the conscious only that is able to block this message’s execution. Uber uses manipulation, benefiting from the mechanisms of evolutionary psychology, appealing directly to the unconscious.

I’ve described a similar mechanism while writing about its application to guest fans. The only difference is that here Uber provokes accidents and risks lives. But it’s not a secret that Uber does not care about people’s lives.

But do not rush to use Lyft. They are using similar mechanisms. A driver receives a new order while he is still carrying out the previous one. Solving their own problems, both companies cease developing respect for their employees and customers. But it’s the road to nowhere. One manipulation is followed by another one and another one.

Nice comments from the company’s representatives that were given as part of the New York Times investigation do not cancel the responsibility for such unethical manipulation. I’ve had to work with different companies. And believe me, the politest and most persuasive PR specialists are in the companies that really have something to hide.

In all of my projects, I always insist on full respect for employees and clients. My regular readers know why it is important in terms of evolutionary psychology and hormones.

If you support this point of view and need an advice, a project development and implementation of it, write to me at E-mail leon@sportsneuromarketing.com. We’ll reply to you within 24 hours.

SEE ALSO: Neuromarketing in politics or 3 factors that will make you a president